Are you the one who immediately camouflages into the background at every social or formal event involving more than 10 people? Do you feel lost in the crowd of over achievers and naturally extrovert people? Are you one of those who attend events but are remembered by none? Well I am! And I know how difficult it can get to impress people in just one meeting. People end up forgetting my name, leave alone who I was and even if I was present or not.

In this increasingly competitive world this kind of disability can cause a serious injury to your image and career. You may have a range of qualifications but they’re useless unless you are noticed by the right people at the right time. You need to make your presence felt in a crowd of people. Wondering how to cultivate that “memorability”. Here are a few tips:

First impressions are very important. It can be about your attitude or the way you dress. According to a study, 55% of the face to face conversation comes from what you see, 38% from tone of voice and 7% from words you use. Hence, physical appearance plays a vital role in any face to face conversation. Dress according to the situation. Don’t be over-dressed or under-dressed as it can affect our own confidence and distract the other person as well.

The way we dress affects the way we think, the way we feel, the way we act and the way others react to us. If we dress well, it automatically gives us a confidence boost. This leaves a lasting impression on the other person as well.

“I can live on compliments for two months”- Mark Twain

Don’t be afraid to be positive and encouraging. Offer compliments to people. It can be about how they look, any good thing they have done or simply for something they own. If someone is good at writing, then tell them so. If someone looks nice, or is well dressed, then say you think so. If you think someone owns a nice watch, then let them know.

But simply saying “You have a nice watch” won’t make the person very happy. Compliments should come from a place of genuine desire to make other people feel better. They should make the person feel that you are actually interested.

Coming back to complimenting the watch, it should be like this- “Hey Karan, you have a nice watch. Where did you get it from?” Now this leaves a lasting impression about you on the other person. Here you have used the name of the person which adds a person touch. Also, you have asked a question after that which keeps the conversation going.

Again, moderation is essential. The occasional genuine compliment is way better than a constant stream of try-hard ones.

People can often have an urge to ‘act cool’ and want others to come to them. That is the wrong urge. Appearing bored or disinterested is not the way to be remembered.

Besides wanting food and shelter, human brain wants just one thing, i.e. to feel important and have people’s attention. When someone is talking, make eye contact and respond. Totally engage yourself in what the other person is saying. Do not look into your phone or try to look over their head as you talk to them to find someone more interesting. Make them feel important. It helps to communicate confidence and a willingness to understand. Paying undivided attention to people can make all the difference. Studies have found that people who communicate through “correct” active gesturing tend to be evaluated as warm, agreeable and energetic, while those who remain still (or whose gestures seem mechanical or “wooden”) are seen as logical, cold, and analytical.

Active gestures say a lot about us. When a person has his hands inside his pocket or under the table, it shows he is nervous. If he crosses them in front of his chest, it means he is disagreeing or wants to protest. You may sound confident in your tone but your gestures give a subconscious message to the other person.

Trust is established by congruence between what is said and how your hand gestures show it. So, let your hands do the talking and make you noticeable. 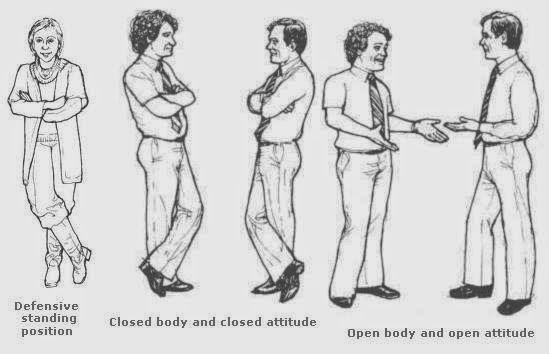 It is important to note that our non verbal communication- our facial expressions, eye contact, the posture and the tone of our voice- they speak the loudest. The way we act says a lot because the unconscious language says the true feelings and intentions in any moment. There are small little things that we may not notice but they can make an impact on the other person.

Create a bond with the other person by talking about something you people have in common. People tend to like and remember you more if you both have something in common.

I’ll share my experience about the same. During an event, I met a person and we encountered the fact that we shared the same college and he was my college senior. I never asked him what he did but we ended up discussing about our college days and teachers. It was a productive and memorable conversation. The next day I had an interview in a firm and the next thing I knew was that the same person I met yesterday was my interviewer. He remembered me!! And the interview turned out to be very light hearted after that.

So go out and find common things. It could be some common place where you come from, some passion you both share, the same adventure sport you both want to try, or one common place you both wish to visit. This could help you become a memorable person.

Also, remember that you should always ask ‘Open-Ended’ questions. A question like “Do you have any plans for this weekend?” would make the other person answer in only Yes/No. This halts the conversation. Ask more open ended questions like “What has been the best part of the week?” or “Besides work, what makes you get up in the morning?” This way not only the conversation flows but it gives you an opportunity to show the other person that you are interested in them.

Asking questions can protect your conversation from grinding to a halt and also help you build a rapport with the other person.

Try these! You will be amazed at how memorable you become.

The above article has been authored by Hency Batheja